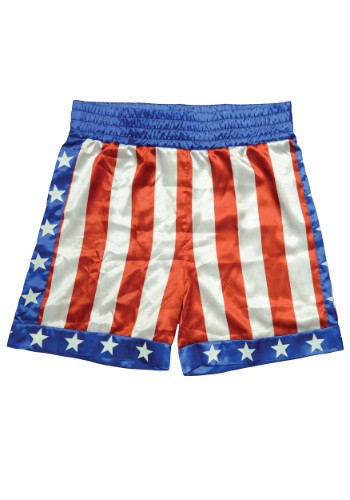 So. You fancy yourself a boxer. But not just any boxer. An amazing boxer. Perhaps you've not only got a killer right hook, but a persona to match. A loud, theatrical persona that the crowd loves. Brash. Vocal. And the skills to make you a legend. An American Hero. You've the makings of Boxing Champion. Just like Apollo Creed.

You know Apollo Creed? Rocky Balboa's rival? Yeah, that one. Of course, maybe you don't want to be seen as Apollo Creed. Although he was Heavyweight Champion of the world, he did get knocked on his butt when he went toe-to-toe with Rocky Balboa. So that was kind of embarrassing. But hey! He later comes around and even trains Rocky (after he got whooped a second time)! So as far as we're concerned, he's a pretty awesome guy (and boxer).

If you're feeling the desire to channel one excellent boxer, try these Adult Apollo Creed Boxing Trunks. They're 100 percent polyester satin with elastic waistband, and the iconic red and white stripes (with blue and white stars of course). Put these on and you'll look like a boxing champion for sure! A patriotic, memorable, boxing champion! Heck, even Rocky wore these Trunks at one point, so if you put them on, you could probably channel either one of these boxers! Or, if you prefer, you'll just have some really cool shorts.