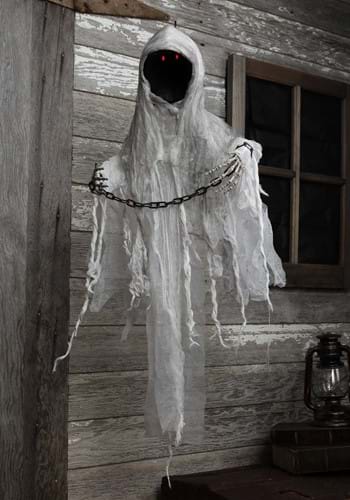 Though there are SO many good Halloween icons to choose from, but you can't argue that the ghost is the original haunted Halloween hero. Well, you could argue it, but you would likely lose. Ghost stories, ghost towns, ghost hunting, ghost encounters...the paranormal has been captivating lovers of the dark arts for generations.

But we thought it was time the white-clothed ghost got a bit of an upgrade worthy of the modern haunted house. After all, it's easy to pass up a simple ghost in favor of a flashy serial killer, a winsome witch, or a realistic skeleton.  But it's pretty hard to deny the power and terror of this Animatronic Hanging Faceless Ghost Decoration! It captures the nostalgic feeling of encountering a great ghost story as a kid, but it's made for the sophisticated scare-lover you've grown into.

Motion, sound, and lights come together to bring this horrific hanging ghost to life. When activated, this 3-foot phantom's skeletal arms try to break out of its chains, it begins to emit the most tortured, haunting cries of agony and grief, and its eyes light up red (but you can't see its face!). A tattered & stained white gauzy robe completes the piece for a most effective — and unforgettable — greeting for your guests.

Questions & Answers
Q: What is the activation method? Is it touch activated, sound activated, constant on??? (1 Answer)
Asked by Kcco | June 4, 2022

Monster Responds...
This Hanging Ghost Animatronic Decoration has an ON/OFF switch on the battery box. When the decoration is set to ON it can be triggered in two different ways.First by sound, like clapping or loud talking. The other by movement.
Answer
Ask a Question
Reviews