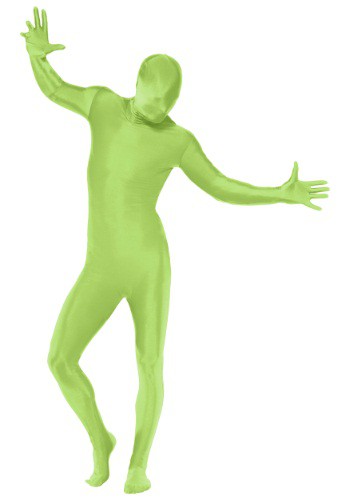 You’re not going to contribute to this mundane mediocrity! By George, you’re going to come up with a spectacularly original costume, one that no one has ever seen before. Maybe you’ll create a painfully detailed, stunning accurate 16th-century Templar knight, complete with hand-crafted chainmail. Or a wolf man costume covered in real yak hair, just like they used in the old movies. Or a mermaid with real scales.

There’s just a few problems… All of those costumes cost serious money. And they take a lot of time. But your costume party is tomorrow night. How will you be able to make an original costume in less than 24 hours, without breaking the bank?

Go green this Halloween in this Zentai Green Man Costume! There are so many possibilities with this jumpsuit—it’s a beautiful blank slate. You could be a Martian, or a plant, or a gecko… We can almost guarantee that there will be no one at the costume party dressed like you. Almost.

Product Reviews  Write A Review1 Review
Two Stars
By Current Customer / December 3, 2018
Was this review helpful to you?YesNo
Get 20% Off