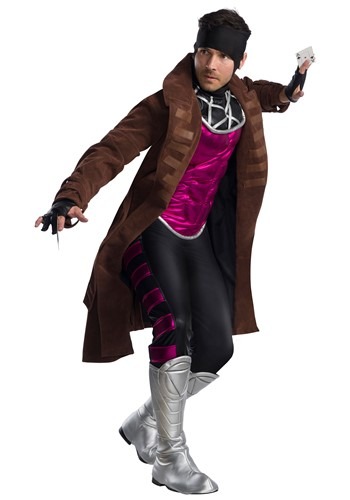 The debate rages on. It probably won't ever end. "What's the best superpower?" For some reason, folks usually limit it to flight or invisibility, but those folks have never met the X-Men crew of Marvel Comics. In this fantastic world, you've got teleporters, empaths, blasters, beasts, and body-swappers! Half of the mutants are doubling up on powers and others have powers that they haven't even tapped into, yet! How can anyone rate the ultimate power in a system like that?

Of course, we think that the greatest power of isn't even related to a mysterious mutation. We're talking about the smooth stylings of the Cajun, himself, Gambit. This guy might have the amazing abilities to charge up items (usually playing cards) with kinetic energy, but there's something about Gambit's sweet accent and easy confidence that nobody can possibly beat. (Add an awesome billow of his iconic coat and you've got us in stunned awe in a snap!)

It's time for the energy to run down your arms and fill your hands! Transform into the ultimate X-Men with the help of this officially licensed Gambit costume. The base of this costume is a printed jumpsuit that features Gambit's sparkling style thanks to the contrast of black and neon. The padding on the chest augments your musculature while the faux leather duster makes it obvious that you're the Gambit worth betting on. A faux leather belt goes through the jacket loops and the fabric hood fits easily on your head. Finish off with Gambit's iconic gloves and boot covers and all you need is a deck of cards and to practice your Cajun!

Gambit is a master of cards and he's happy to play Solitare with that deck... unless, of course, he's got someone else to play with. The only thing better than wearing this awesome Gambit costume is teaming up with someone else in a group of X-Men costumes and making your mutant powers come to life!