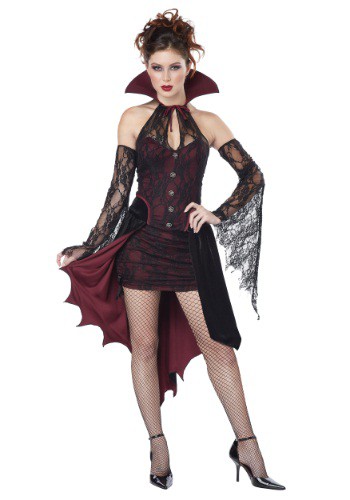 Most people say that being a vampire is terrible. They call it a curse, they try to kill vampires with stakes, eat lots of garlic, whatever they can think of. But why? Really? Being a vampire sounds kind of awesome. Sure, there's the whole being undead for all of eternity thing, and the eternal damnation thing, we're not saying those aren't negatives, they certainly are. But you've got to look at the silver lining (ooh, not silver since you're allergic now).

Think of the positives: Never getting older, getting wrinkled or bad joints. Vampires probably can't get cancer or hangnails or anything. It's easy to embrace the plus side when you're wearing this costume. It features a dark red mini dress with black lace and a long black velvet overskirt that has a batwing-cut hem. You'll feel one with the night in the classic vamp high collar and the wide lace sleeves. So embrace your newfound life as the undead elite. How else can you pull off a big collar, blood red lipstick, and those fishnet stockings?

So listen, we know you've been feeling down in the dumps that you were turned into a vampire and you're not sure what to do now but you can't help drinking people's blood. That's only natural. But you're beautiful, friend. Just take a look in the mirror- Huh, you know what never mind, that might not work for you. Just trust us that you're not just a vampire now, but a vampire vixen, the sexiest creature of the shadows there is. And you'll need a wardrobe that shows it, like this sexy costume. Just don't be surprised when your friends are all jealous. Anyone who isn't happy for you turning into a vampire vixen isn't a true friend anyway. We'll stake our reputation on it. Whoops, poor choice of words! We cross our hearts- nope, that doesn't work. Let's just say being sexy is in your blood.