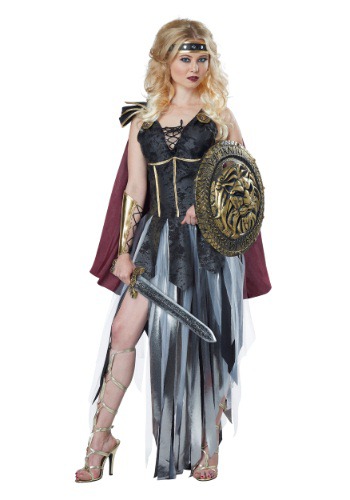 If you ever find yourself in the midst of a gladiator battle, it doesn't really matter who's fighting. The only thing that matters is that you are quicker with your sword than everyone else! Strap on this Roman Gladiator Costume, and secure your place as a legend of the arena!

When squaring off against opponents in a battle to the death, if you don't come in first place, then you might as well be last. You have to possess the discipline and skill of a solider, and combine it with the guile and instincts of an outlaw. But, since the battles were also supposed to entertain the bored crowds of Ancient Rome (they were basically the reality shows of the day, with less singing, but just as much backstabbing), the fighters also had to look cool as they fought. So, gladiators donned ornate costumes and armor, and put on a big, bloody show for everyone. Does your job suddenly not seem so bad?

As weird as it sounds, though, doesn't it still seem a little exciting to put on the garb of a gladiator and defend your title as the best warrior in the realm? Luckily, this historically inspired costume lets you do that without actually having to fight, but it still looks spectacular and fearsome! The skirt and bodice have the look of leather armor, with a flowing dress to give you plenty of eye catching flair. Add any additional arms and armor you'll need to be victorious, like fierce boots or sandals, gauntlets, and of course, a trusty sword and shield. You will forever be remembered as a champion of the Colosseum! Or, at least a champion of the costume party.