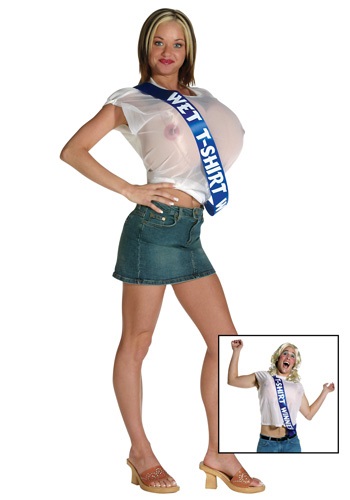 Let us tell you a little story, before all those free beers hit you and it doesn't get stuck in your noggin. Yeah, we saw you sucking down those light and bubbly pilsners as if they were water!

In 1997, a few teenagers from Portland, Oregon, celebrating the completion of high school held a wet T-shirt contest on a Boeing 727 to a Mexican resort. Yeah, and you thought you were cool. We bet you've never started a party early like that before. Anyway, a flight attendant even helped them out, encouraging the contest on the flight deck—like, in the cockpit, next to the person who was flying the entire plane! It wasn't all a happy ending, though. The flight attendants were disciplined and, we're sure, the participants were rather embarrassed when they became the subjects of a then-viral news story. Oops!

The moral of the story is nothing, really. We just want you to go try to top that. Go ahead, try it. But don't bother writing a letter if it ends up being a list of excuses—oh, and as the saying goes, videos or it didn't happen! You can slip into this costume to get a quick start at it. It's a 100% polyester mesh t-shirt top with a blue sash printed with "Wet T-Shirt Winner." There, we even got you started. Now, what's your gameplan? We highly, highly recommend steering clear of aircraft.