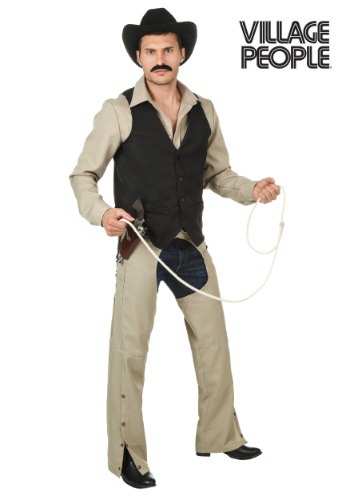 Everyone wants to go to the YMCA. That’s a truth that very few question, usually because they cannot help but to start singing and dancing to the obvious fact! Shortly after that, people ponder entering the Navy, too. We’d all concluded that these two things were random, but the frequency that people started asking (and singing) about each only caught our attention when we saw what kinds of jobs people were leaving. Police officers, construction workers, army folks… even movie inspired cowboys and indians flocked to become a part of each, frequently singing out their interests!

It was then that we realized the connection: the Village People! Those dastardly darlings were seducing the world with their combination of disco-fever powers and delicious duds. How did they manage such potent compulsion? Well, it depends on who you ask. Some point fingers right to the leather clad biker boys, but there is something dangerously tempting about Randy Jones, the black hat bandit cowboy. Hey, they both wear leather, and who can resist that!?

You, too, can wield this power when you transform with this officially licensed Village People Cowboy costume. The button up shirt and vest make up the immediately obvious part of the costume. (Remember not to button that shirt up too high, now, or you’ll risk losing attention to that Biker!) If you start losing focus, just give a wink and a tap of your black hat and then smooth out your dauntingly dangerous mustache. Take a squat on the arm of a chair and slap your chaps which Hook and Loop fastener at your waist and gleam with gold button rivets, the same as your belt and holster. You saved the Wild West, remember, and can bring that Wild back at the literal drop of your literal hat.