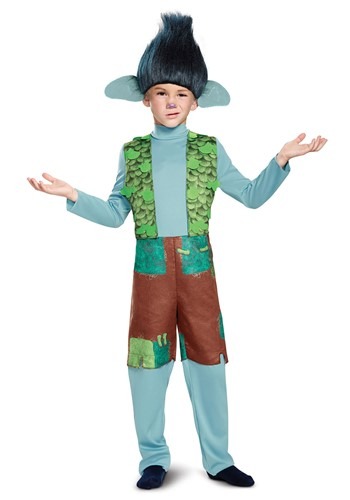 Time for the Blues!

In any other world, having the blues is considered a little bit sad. But, we're talking about the Trolls! These guys love color, music, and let's not even start in on how much they can't wait to show off their dance moves. At least that's true for most of them. Legends say that there is a certain sullen character who'd rather warn folks about impending danger and do all in his power to keep the other trolls quiet!

We can't really blame Branch for not wanting to let the giant troll-eating Bergens anywhere near the village. (And, frankly, he was totally right, too!) But, fortunately, there's some genuine Troll music beating deep in Branch's heart. When the chips are totally down, he's ready to unleash the music and reveal the inner bright blue to everyone. If you know somebody that's got a song and dance just waiting to burst out, we've got something for them, too!

Bring a little extra color to your kiddo's life with this officially licensed Trolls Deluxe Branch costume. This is a bright jumpsuit inspired by the magically musical movie. It fastens in the back with hook and loop strips and has a blue-gray base that will give your tyke the studly slate look of Branch. Sewn on top are a pair of patchwork pants and vest panels that look to be crafted of leaves—a few of them even with 3D effects. Complete your little Branch's look with the included wig that features tall hair and soft-sculpted ears. (All the better to hear those peppy tunes.)

With all of that time to ponder music on his own, Branch might actually know more about different kinds of music than the rest of the Trolls together! If your tyke is ready to tackle all different kinds of Troll tunes, than this Branch costume is perfect for them!

Size Chart
3T/4T4/67/8
Inches
Centimeters
Costume Sizing Tips
Questions & Answers
There are no questions for this item yet. Be the first to ask a question!
Ask a Question