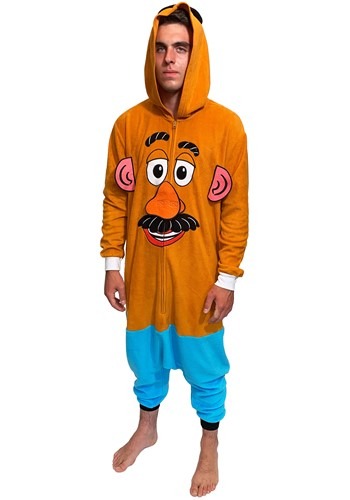 Mr. Potato Head has had a long life in the spotlight. He was the first toy to get screen time in a commercial. He starred in his own television show and then when Pixar whipped up Toy Story, he hit the big time, the silver screen. By the time he made Toy Story, Mr. Potato Head had already gone through more cosmetic transformations than Barbie. Part of that has to do with his interchangeable facial features, but when you’re competing for Hollywood fame sometimes a quick plastic addition can help a famous potato keep up with the freshest trends.

From felt and pushpins to a full plastic body, Mr. Potato Head seems to be the only one to figure out the real secret of ageless looks—and possibly immortality. While we don’t recommend turning into a full plastic potato to find Hollywood success, we do agree that experiencing a bit of Mr. Potato Head’s life-long fame could be fun.

With this Mr. Potato Head Union Suit, you’ll be ready to walk the Hollywood Walk of Fame in style. This soft jumpsuit is designed to look just like Mr. Potato Head at the height of his Toy Story fame. His signature schnoz is detachable, making it easy to zip into your new potato existence. The rest of his classic good looks are embroidered and appliqued on the front of the suit, so you won’t need to worry about losing an eye or ear when fans flock for a chance to meet their favorite potato.

Ageless looks and adaptability are what helped Mr. Potato Head rise to fame, but we’ll always appreciate him best for his classic Toy Story look. The cynical and sarcastic spud continues to entertain, and we don’t need a pair of plastic lips to express our delight. Become the world’s hottest potato and help spread the potato love with this Mr. Potato Head Union Suit.