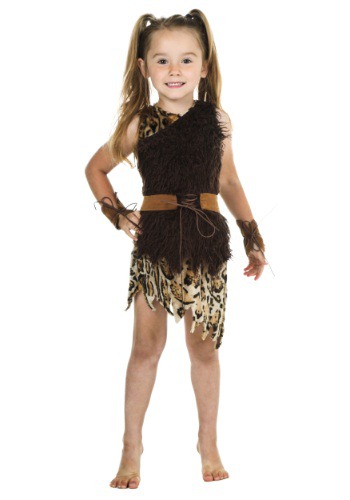 It might seem easier to live in a cave. You'd never have to go to work. Your daughter would never complain about going to daycare(because there wouldn’t be one). Never again would you have to pay a cent in taxes.

But, you can see the pitfalls in that. No TV. No internet. No pizza, or french fries. No clean clothes. No education. Your sweet little darling has trouble seeing the downs that would come with living in a cave for her whole life. Insisting that she could live without modern technology. She would hunt, and gather her food. Live off the land. Ok, so she probably wouldn’t say that, but she would be thinking it.

She has actually become quite obsessed with the idea of being a cavegirl. She walks around the house on her knuckles (until it starts to hurt), she refuses to let you comb her hair, and she tries to get away with eating without silverware. And because you refuse to let her wear leather skins to daycare, she has already started to ask if she can be a cave girl for Halloween. And, she can with this Toddler Cavegirl Costume. She can wear this faux fur dress with a jagged hemline, faux leather belt and gauntlets, and channel her inner prehistoric self. She will be able to grunt basic words (like "trick or treat"), walk around bare foot (in the house at least), and call home her cave. Sure she'll be amazed when you sit her down for a dinner of vegetables, chicken, and a glass of milk. But, she will be so hungry from her day of being a cavegirl that she won't even have time to grunt a response. You'll have to break it to her that she will still have to go to daycare though.