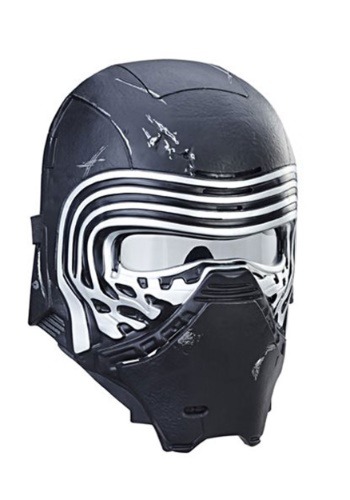 When you become a Sith warrior, or at the very least fall to the Dark Side of the Force, it seems like the next step in the transition is to get a cool, but frightening helmet. Darth Vader had one (and it became iconic for a villain) and then with The Force Awakens we got the sequel: Kylo Ren.

Kylo's helmet, of course, is sleek and updated from Darth Vader's, but it still has that Dark Side vibe with dark facemask, obscured eyes, and some kind of voice changing tech. We really like that Kylo Ren decided to add some silver trim to make it a little different and interesting. We also can't help but wonder how that battle damage happened... what's the story there!? We're not sure yet.

No matter, if your kid has his sights set on the dark side, well, then it will be time for him to write his own history in the galaxy far, far away when you get this electronic Kylo Ren mask. It looks just like the one seen in the iconic Star Wars films, and it has an integrated voice changer to sound just like the mysterious Kylo. Officially licensed, it's his chance to fall to the Dark Side in Sith style!