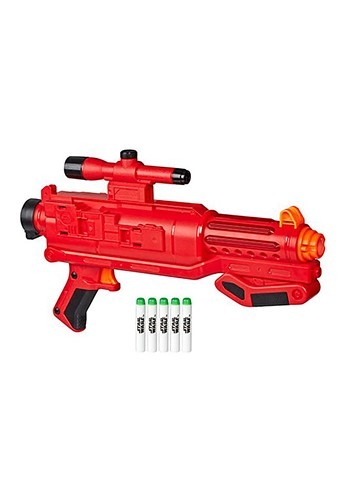 Take Aim and Stand Out

It's tough being a Stormtrooper. You're probably a clone. If not, they name you with numbers, anyway. You've got the same white armor as everyone else. Your bosses talk constantly about the Dark Side and casually Force choke anyone whenever they get bad news. Plus, there is that whole terrible rumor that you've got awful aim.

It's time to take a stand. It's time for a change. It's time for a new order... a First Order, in fact! And, with that kind of an upgrade, you know that it's about time that you get some high-quality blasters so you can show off your true skills!

Take back the galaxy in a gleaming way when you aim down the sights of the Red Trooper Blaster. This officially licensed toy weapon is fully functional... in that it has foam darts that are sure to provide a great time when they hit their mark. The toy is designed after the red weaponry used by the troopers of the First Order in The Rise of Skywalker, too, so it makes a perfect accessory for your costume from the Star Wars new trilogy or makes you really stand out in a classic look, too.

There's something to be said about the bright shade of red worn by the Sith Troopers of the new trilogy. Why shouldn't that extend to your brand new blaster look!? Upgrade your costume and your Star Wars fun with this Red Trooper Blaster.