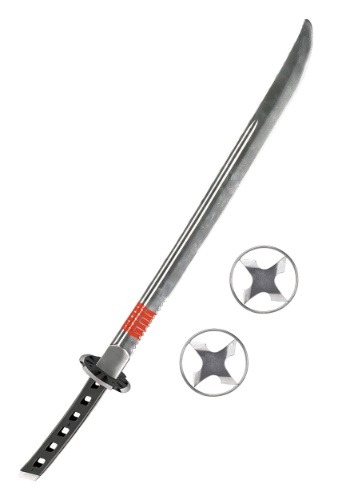 The Cobra are a dangerous bunch! Sure, most of their plans end in catastrophic failure, but they’re still a force to be reckoned with. That’s why most members of the G.I. Joes pack some serious weaponry when they head out on missions. We’re talking blue lasers guns, red laser guns, and rocket launchers, but some Joes know the art of subtlety, like Snake Eyes. Snake Eyes can’t run around shooting lasers while he’s trying to sneak into a Cobra base. He needs a weapon that’s a little more refined and MUCH quieter. And that’s why he carries his signature katana and throwing stars!

If you’re trying to head out on a stealthy mission like Snake Eyes, then you’re going to need a weapon like him! That’s what this officially licensed G.I. Joe toy weapon set is made for!

Based on his weapons from the series, this Snakes Eyes sword and ninja star set will have you fully equipped for any mission. The sword is made of molded plastic and is shaped into a standard katana. The ninja stars are also made of plastic and are designed to be tossed.

Good for all Joes

Great for kids and adult alike, this G.I. Joe toy weapon set should help anyone fight like a Joe! Just make sure to pair it up with any of our Snake Eyes costumes for the complete look.