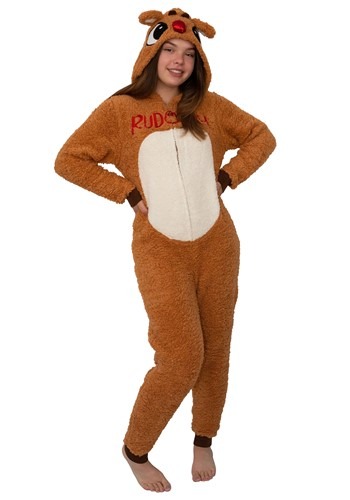 Will You Guide His Sleigh?

It's getting late on Christmas Eve. Tons of Christmas gifts need to get delivered to boys and girls across the world, but there's just one little problem. A thick fog has covered rolled in from out of nowhere. We're talking the ENTIRE Earth. This isn't just some kind of rinky-dink two-bit fog that blankets a single city! What's Santa to do? Well, he's going to need the help of someone with a bright red nose to guide his sleigh through the night. That's where you come in... by wearing this Rudolph the Red-Nosed Reindeer Union Suit!

When you assume the role of Rudolph the Red-Nosed Reindeer, you will have to make that difficult choice! Will you help guide Santa's sleigh through the fog to get the gifts out on time or will you just head to bed early?

Whether you decide to help Santa Claus or you decide to take a quick nap, this Rudolph the Red-Nosed Reindeer Union Suit Costume has you covered. The cozy jumpsuit is a pajama-style costume made out of an ultra-soft fleece material, so no matter what you decide to do with your evening, you'll be comfortable while you do it! The suit fits with a simple zipper down the front and the rib-knit cuffs help provide a snug fit. The suit has "Rudolph" embroidered onto the front, but our favorite part about this jumpsuit is the hood! It comes with an adorable red nose on the front, along with eyes, nose, and ears. Just flip up the hood and you'll transform into Santa's number one reindeer!

As for us? We know what we'd do! If Santa called us while we were wearing this Rudolph the Red-Nosed Reindeer Union Suit... we'd probably tell Santa Claus to invest in some heavy-duty fog lights instead, because this comfy union suit makes us want to cuddle up on the couch for a movie night at home.