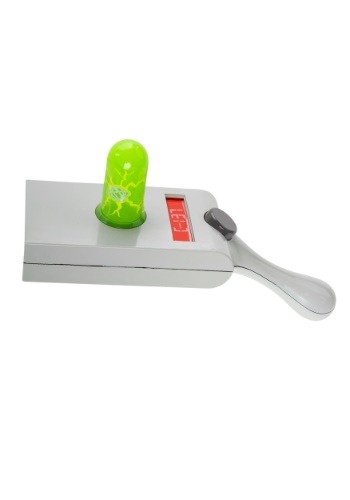 Why is it that half of the known dimensions in Rick and Morty seem to have anthropomorphic food? Let’s see, there’s Pizza Dimension, the world where walking, talking slices of pizza act like human beings and eat human beings. We also get a glimpse of Corn Universe where corn cobs walk and talk like human beings. We’re willing to bet there’s also an Ice Cream Universe somewhere out there too. Actually, that kind of sounds like a universe we’d like to visit! Now, where’d we put that Portal Gun accessory?

Okay, so maybe this Rick and Morty Portal Gun won’t actually transport you to strange and exciting new dimensions. It will, however, give you one realistic looking accessory to add to your Rick and Morty cosplay outfit. The toy gun is molded to look like Rick’s Portal Gun that he uses in just about every episode. It even has “C-137” on the little red display on the front, to indicate your intention of heading to universe “C-137”.

Now, we’d like to warn you that traveling to the C-137 universe could be a bit of a shock, since we hear that place is filled with Cronenbergs. If, for some reason, you were ever able to get this toy gun to create portals, we suggest staying here in our universe (or maybe you could head to Ice Cream Universe).