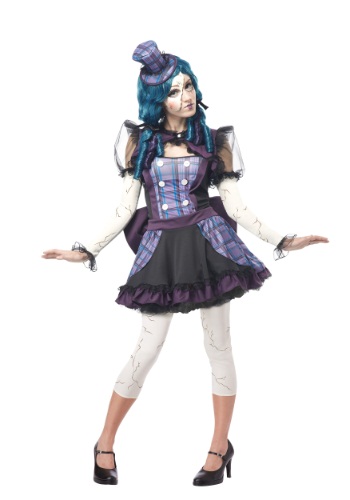 Remember that spooky doll you once saw when you were little that always seemed to be watching you? What if we told that it wasn't your imagination? That's a pretty creepy thought, but not quite as creepy as you'll look in this Plus Size Broken Doll Costume!

We're not saying that all dolls are possessed by supernatural forces, but we've seen at least a couple of them out there that look like they might mysteriously pop up in strange places on dark and stormy nights (possibly holding an adorable little knife). The dolls that really spook us out, though, are the ones that look like they've fallen on hard times, with parts missing or broken, and their once-glamorous outfits now all grimy and tattered. It's kind of a sad thing to see, or rather, it would be if we weren't more worried about those hauntingly tragic little toys springing to life and going on little vengeful rampages! You might say we've just seen too many horror movies, but when it comes to possessed dollies and their creepy googly eyes, is it really worth the risk?

At least, when you're wearing this vintage style costume, you'll look as scary as a forlorn doll, but without involving any black magic or vengeful spirits! Just slip on the ruffled dress and the leggings, which feature printed cracked patterns, and the matching partial mask to pull off this eerie style. Oh, and we were just kidding earlier when we suggested that dolls watching you wasn't in your imagination. Or were we...?