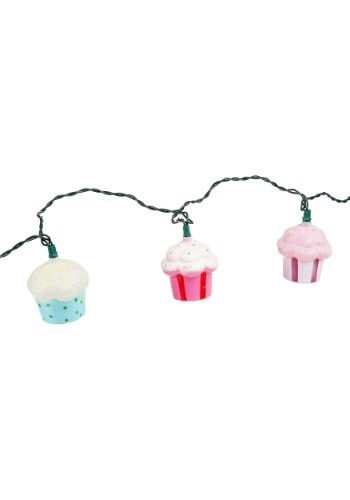 Usually when someone says, 'the cupcakes are burning,' it's not a good sign. First of all, what a waste of such a scrumptious little treat, and second of all, now there's smoke everywhere— someone, grab the fire extinguisher!

However, we're not talking about burning cupcakes, we're talking about cupcake lights! The tiny little cupcakes appear to be bite-sized but don't try nibbling on them because even though they appear realistic, they're plastic. Oh shucks! Allow them to inspire your next baking endeavor! Warning, the 10-piece sting lights possess the ability to make others crave freshly-frosted and newly-sprinkled cupcakes.

Each light is covered by a plastic cupcake, featuring pretty pastel colors, all attached to a 30-inch black wire. The cupcakes are small measuring 2.5" X 2.5" and once plugged in, they give a whitish glow. We think they look especially yummy in a kitchen or dining room, but can also be used as an outdoor decoration.

Got a craving for cupcakes? We thought so! Wear any of our cute cupcake costumes while you whip up some delicious baked goods in the kitchen. Plug these Kurt Adler designed string lights in while doing so!