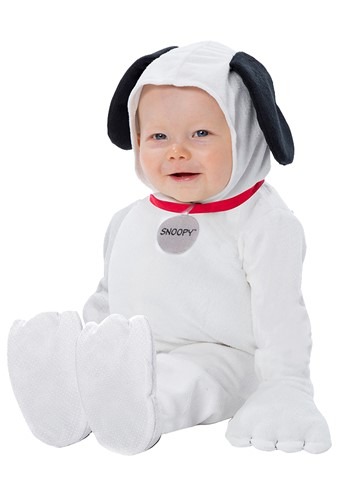 The Sky's the Limit

Snoopy may have only been a humble beagle, but he never let that stop him! The adorable character from Charles M. Schulz comic strip let his imagination take him to new heights. Just look at some of the cool profession that pup had! He became the ace pilot, the Red Baron, when he tossed on a scarf and sat atop his little red doghouse. A set of shades let him indulge in his alter ego, Joe Cool, the most popular kid at Charlie Brown's school. Why, if a little beagle can accomplish all of that, just think of what sort of things your little one will do! For starters, they could become your favorite comic character, the one and only Snoopy! With this cute little costume for babies, it's easier than ever to indulge your little one's imagination!

This Peanuts Baby Snoopy Costume instant transforms your infant into the beloved comic strip classic, Snoopy. The costume comes with a white onesie that's made out of soft fleece material. That means it's designed to keep your child cute and comfy! The neck has a red collar, along with a dog tag in front that reads, "Snoopy." Of course, it has an attached hood on top, which is made out of the same fleece material. It even has a pair of floppy ears and a black nose in front to give your child an authentic look. The mittens and footies help bring the finishing touch, while keep your child extra warm in this adorable outfit.

Whether your child is destined to become the next ace pilot or they want to be just like Joe Cool, this Peanuts Snoopy Costume is the easiest way to get the look. You could even dress up in one of our Charlie Brown costumes if you want to have an unforgettable duo costume!