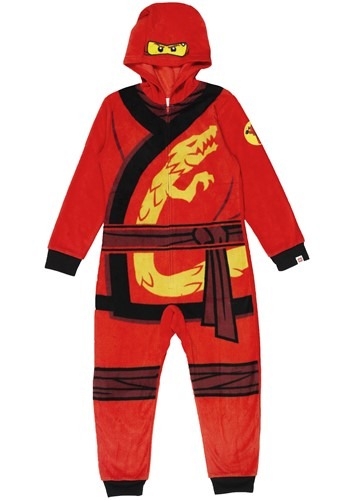 In Lego’s Ninjago, Kai was pretty reluctant to become a ninja. At playtime, all your child wants to do is practice their “Kai skills” while exploring the ninja villages they’ve built. When Kai travels, he picks a vehicle from his fleet. When your child imagines journeying through Ninjago, they build a flying-dragon-boat out of exclusively red Lego bricks. Kai keeps his True Potential to himself. Your kid prefers to harness its power to resolve every Lego ninja battle. Kai forges Golden Weapons at his smithy. Multi-colored bricks create ninja-tools that require expert explanations from your child to be understood. Kai wears a fiery ninja suit that perfectly fits his minifig body. Your kiddo ties a belt around their belly and calls it a Ninja-belt. But as all Elemental Masters and Spinjitzu users know, even playtime tales are better with a proper uniform!

Take your child’s playtime to the next ninja-level by letting them become their favorite Ninjago character in this officially licensed onesie. Based on Kai’s Legacy Minifigure, this Kai Child Union Suit will have your kiddo feeling as confident as the fiery ninja. The super-soft fleece jumpsuit features hidden zipper down the center, a hood with Kai’s face, and character-specific printed details that make it look like your kid is wearing a full ninja suit. Whether your little ninja is building Lego masterpieces in their bedroom or trick-or-treating with their Ninjago friends, the rib-knit cuffs on both arms and legs keep this cozy ensemble ready for the adventure!

Becoming a ninja has its difficulties, even in Lego Ninjago. But with this Ninjago Kai Child Union Suit, your child will be ready to master every ninja skill and Lego build! Whether they’re getting ready for playtime, bedtime, or Halloween night, this hooded jumpsuit will have them ready for it all!