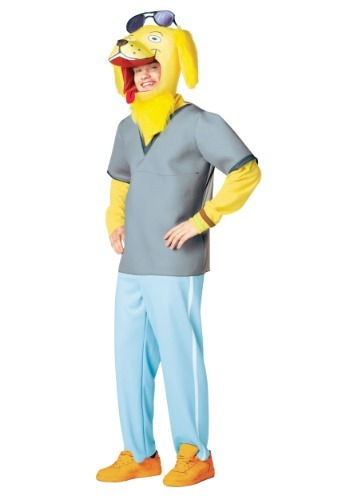 Who's a Good Boy?

When you're dressed as Mr. Peanutbutter, you're a good boy and you've got the license plate to prove it! You live the simple life compared to the other animal in Hollywood (or do we call it Hollywoo now?). Everyone loves you and you like everyone, you're a golden retriever, after all. Mr. Peanutbutter has his weaknesses. He can't stand tennis because he just can't fathom why no one would catch the ball. He totally understands how to ride the waves of fame. He emerges into the television lifestyle accidentally, stumbling onto the set of Untitled Horsin' Around Knockoff in the middle of a live taping. He's just like all the real golden retrievers that we've always known. Aka: a good boy.

This golden retriever has a sculpted head with a big snout, a smiling face, and large eyes and a tongue hanging out. The ears have faux fur on the neck and ears to make them tempting to scratch and pet. There are sunglasses placed on the top of his head just like the Californian and Canadian dog he is. He's wearing a grey t-shirt, blue sweatpants, and he's got yellow sleeves. Basically, this costume will make you a hot dog television star.

You're sure to have a blast when going out as Mister Peanutbutter for your next costumed event, especially if your friends are joining you as the other key characters from Bojack Horseman. Still, we do have a few key words of advice. Make sure you stay away from the Reeses cups out there. Yes, they are filled with your namesake but they are covered with a substance that's poisonous to your dog spirit- chocolate. Secondly, simply stay away from fireworks. You're a cool dog but those floppy ears are sensitive! Other than that, you're good to go. Now, who's a good boy?