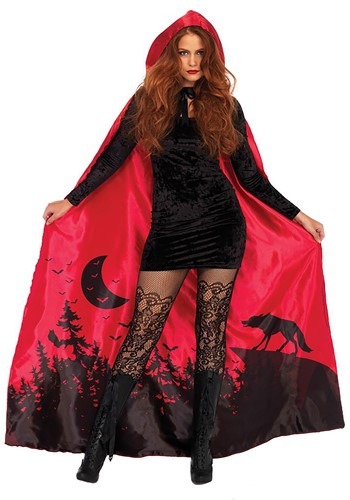 The sun was low in the sky as Little Red packed a covered basket. A chill in the air warned of coming mischief, but Red could not change her plans. Out into the windy evening, she threw up her hood and strolled into the forest. No owls hooted. No deer leaped between the trees away from the sounds of cracking twigs. The forest seemed deserted. Grandmother’s cottage came into view from the forest path; the familiar smells of a hot dinner didn’t meet her. No smoke rose from the chimney. The windows were dark and lonely. It was hard to move forward, but Red could not pause—she had work to do.

Little Red pulled her cape tight around her shoulders as she moved deeper into the trees. She knew she was getting close to her destination—new smell, stale and metallic, met her nose. A low growl echoed from a short distance ahead. The time had come. She would have her revenge on the wolf who ruined her visit with Grandmother!

Gone are the days of a simple red cape. Little Red upgraded to this Hooded Cape to rewrite the story and change the ending for the wolf. In bright red satin, an empowered Red will show the Big Bad Wolf, that she is bigger and badder. With a haunting view of a midnight forest and the wolf that ruined trips to Grandmother’s printed on the inside of the cape, everyone will recognize a new, fierce Red Riding Hood.

Write your own version of Little Red Riding Hood with this Red Hooded Cape. Whether you plan on avenging Grandmother or preventing the whole fiasco with the wolf, to begin with, you’ll look powerful dressed in red satin and a printed forest scene. The Big Bad Wolf should be very afraid.