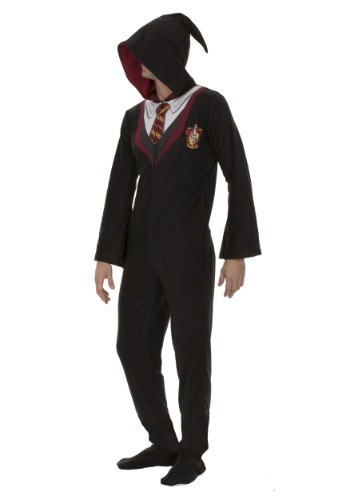 Go Back to Bed Harry Potter

Why does the day have to start so early? In Hogwarts, breakfast starts in the Great Hall at 7:30. That’s A.M. friends, not P.M. If you’re even a little bit late, all of the crumpets and porridge will be gone. Then, you’ll be forced to eat that nasty black pudding for breakfast, which is the wrong way to start any day. Then, you need to rush straight from breakfast to potions class with that ornery Professor Snape and he does not tolerate tardiness! So, how’s a wizard supposed to get out of bed with enough time to put their uniform on AND be on time for breakfast at 7:30? Well, we think we’ve come up with a little secret to getting a jumpstart in the morning.

What if you didn’t have to put on a uniform in the morning? What if, you went to bed in a comfy outfit that doubles as a Hogwarts uniform? Well, that’s exactly what this Harry Potter Gryffindor union suit does for a wizard-in-training.

This union suit is a single piece jumpsuit that’s designed to look just like the Gryffindor garb seen in the Harry Potter movies. It has a zipper in the front, so you can easily slip into this costume and easily slip out of it. It has a printed tie and collar on the front, along with the Gryffindor crest on the chest, making you look like a wizard that’s ready for the day. No one will know that you’re essentially wearing pajamas! The union suit even has a hood attached to the top for good measure.

Now, you can get a head start to the Great Hall for breakfast. Quickly toss this Harry Potter union suit on and you’ll be ready for the day! All of the other young wizards will wonder what your secret is for getting ready so quickly in the morning. You can simply tell them that it’s “magic”.

Size Chart
SMLXLXXL3X
Inches
Centimeters
Costume Sizing Tips
Questions & Answers
There are no questions for this item yet. Be the first to ask a question!
Ask a Question