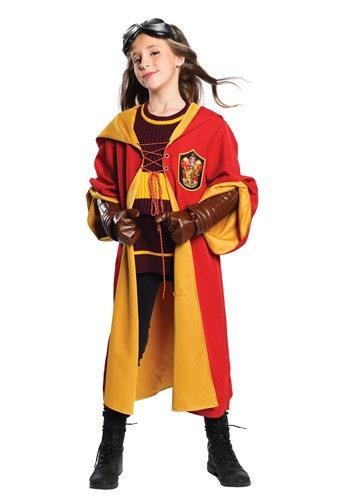 When your child's owl delivered a letter after they'd been at Hogwarts for only a week, you were a little concerned that they may be feeling a little homesick. As you read through the lengthy (and very excitedly written) letter, you smiled to yourself. Your first year had made their house Quidditch team!

The next thing to do would be making sure they didn't have to borrow a set of Quidditch robes. And since first years hardly ever make their house team, you wanted to reward your child with a nice set of custom robes for their very first game. Your options: take a trip to Quality Quidditch Supplies and fight with the crowds that would be swarming to grab the newest broom and riding boots. Or, since the wizarding world decided to try out modern technology, see what you could find on the internet and have sent to your student via Owl Post.

Obviously, choosing to skip the crowds and mayhem of Diagon Alley was the best choice, because you found this Gryffindor Quidditch uniform. When your child takes to the sky in this vibrant robe, no one will be able to miss them. The bright scarlet robe with its gold lining will look like a fiery flash as your young Quidditch star chases after a fumbled Quaffle or an elusive Snitch. A stitched-in pocket gives your kiddo somewhere safe to carry their wand during the game, just in case someone tries to sabotage their big moment. With the Gryffindor lion displayed on their chest, your kiddo will look noble as they celebrate their first Quidditch win!

Quidditch stardom starts at Hogwarts. With this Gryffindor Quidditch Costume, your kiddo will have the vibrant scarlet and gold of their house on their side and a vote of confidence from their fans. After they win their first house cup, there's no telling how soon they'll be playing for the Quidditch World Cup, so when they earn a spot on their house team make sure they're outfitted for all their upcoming success!