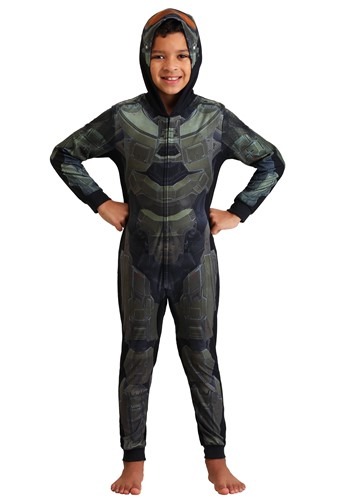 THE MASTER CHIEF OF SLEEP

The war to save humanity never seems to end. Every time Master Chief neutralizes a threat, another bloodthirsty alien army decides to attack humans. What's next? Are they going to invade our dreams next? Actually, we wouldn't put it past The Covenant to try something like that! If they ever do, we'd be completely doomed. Hmm, we have an idea on how to keep those evil aliens at bay.

We need someone on the front lines. We need a soldier who's ready to fight against those aliens in their sleep. We need someone on the level of Master Chief himself! Maybe your child is ready for the job. After all, he's already been defeating those evil aliens on Xbox. All he needs is a bit of extra training and this Halo union suit, and your child will be ready to do battle with any nasty alien while in his sleep!

This officially licensed Halo Union Suit is a comfortable jumpsuit design for kicking some alien butt... and napping. It's made out of a soft fleece material and it even has Master Chief's armor printed on the entire exterior. It fits with a zipper in the front and comes with an attached hood at the top for a cozy feel. It's comfortable enough for a nice movie night on the couch or for battling against The Didact in dreamland.

SUIT UP FOR A SNOOZE

If your child is an avid fan of the Halo series, then this Halo pajama-style suit might be exactly what they need to take their game to the next level. Since it's officially licensed from the Xbox video game series, any young fan of the series will be happy to suit up in it. It also doubles as a quick and easy outfit to wear when your child wants to cosplay as Master Chief!