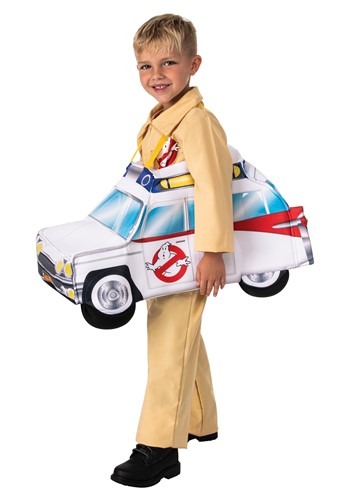 What's the best Ghostbusters gadget? It's a topic that we've spent WAY too much time thinking about. There are a ton of different lines of reasoning. Some people think that the Proton Pack is the best gadget. After all, they need to use that to blast those evil ghosties! Other people love the ghost traps, since the team needs those ghost traps to contain those weakened ghosts. We've even heard some argue that the P.K.E. Meter is the best tool that the Ghostbusters have! Do you want to know what the real best gadget of the Ghostbusters is? It's the Ecto-1.

Yep! Without their trusty car, the Ghostbusters wouldn't even be able to get to the supernatural occurrences in time! They'd have to hoof it all the way through New York City, carrying all of their stuff only to find out that the ghosts are gone when they get there. In fact, without the Ecto-1, there really might not be a Ghostbusters team.

Now, you can transform your child into the very best gadget in the Ghostbusters arsenal! This Ghostbusters Ecto-1 Ride In Costume comes with a foam top that looks just like the iconic vehicle of the team. The exterior has a printed ghost symbol, tires, and windows. The front even has a light-up action, so your child will be ready to race to the scene. It fits with straps around the shoulders. We recommend pairing it up with one of our Ghostbusters costumes for kids to get the full effect.

Bringing the Team Together

If you're trying to assemble the full team in a family costume, then you'll definitely want to add the Ecto-1 to your team. It's just one of our many great Ghostbusters costumes for young fans!