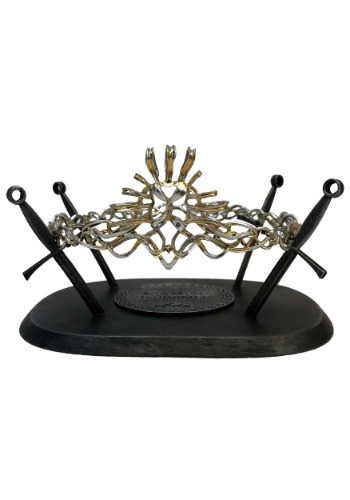 Game of Thrones Hand of the Queen Pin
Add

First of Her Name

"I now proclaim Cersei of the House Lannister, First of Her Name, Queen of the Andals and the First Men, Protector of the Seven Kingdoms."

-Qyburn, to the court of the Red Keep.

Well, um, we did not see that coming. Of course, there's not much about famed Game of Thrones season 6 finale that we did see coming. But, it happened, and for better or for worse, Cersei is Queen of the realm. (Probably for worse!)

So, matter of fact is, if you've got a Cersei costume in mind for this Halloween, you're gonna need to crown yourself queen, too. So, just get this Queen Cersei Crown Replica Limited Edition. It will have you ready to sit on the Iron Throne!

This Game of Thrones Queen Cersei Crown is HBO officially licensed. It was designed by carefully studying the screen used prop by expert designers. The crown is made from solid metal and it features lustrous golden accents. It also comes with an iron sword display stand the lets it rest on the hilts of 4 swords when on display. It's a limited edition production, and each one includes an individually numbered plaque medallion cast in metal and comes in a full-color box with a certificate of authenticity.

For costume fun or for display

What we're saying here is, this crown is pretty much the ultimate accessory to your Cersei costume. And, as it happens, we have a Queen Cersei costume the recreates the gown she wears on the show as Queen! This crown is so cool, it's sure to be a sought-after item for collectors, too. So, whatever you have in mind, be sure to grab this crown asap. It is, after all, a limited edition!