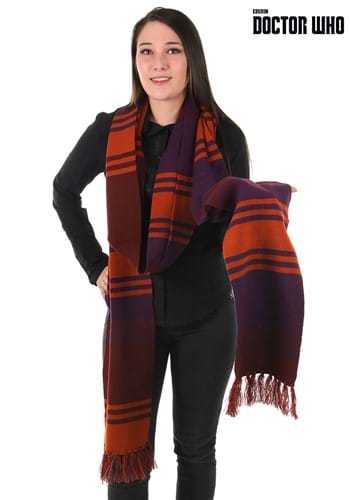 The Biggest Closet Ever

One of the delightful perks of being a Doctor Who fan is that the show has so many costume opportunities. Sure, there are lots of aliens to choose from, but even the Doctor is chock full of options! There are 13 (or perhaps 14? Spoilers!) Doctors, and while they are all regenerations of the same "person," each one is unique in appearance, voice, and temperament. This extends to their clothes, too. Every Doctor has specific accessories that are strictly associated with them. For the Fourth Doctor, played by the beloved Tom Baker, his scarf is his most telltale physical item. Recreate his signature Time Lord look with this Fourth Doctor Deluxe Purple Knit Scarf!

Now, fans of Doctor Who will notice that this doesn't look like the scarf that often appears in later episodes and on internet articles and pictures. That one has more earth tones, with green, gray, and tan as well as orange and purple. In 1975, the Fourth Doctor had a bit of a style update. Rather than get rid of the scarf altogether, the costumer decided to redesign it in purple, red, and burgundy to match his new outfit. Don't worry; it's still impossibly long!