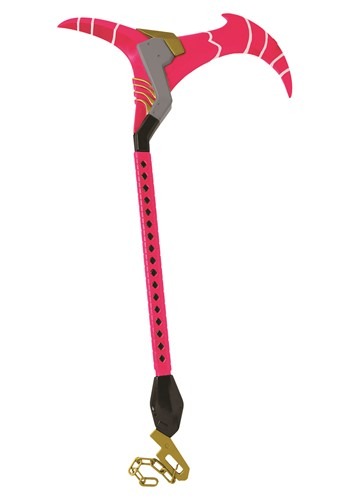 Finally... 100,000 in XP! You have been working so hard for this and it’s finally happened. WHEW! We remember hitting 100k XP like it was yesterday. If you have the Battle Pass for Season 5, and you get the Drift skin, you can unlock the Fortnite Rift Edge Harvesting Tool, which is one mean pickaxe! Do you know how many times we wished we had one, IN REAL LIFE? Seven, at least seven times. We don’t mean to brag or anything, but we finally got one!

The handle on the Fortnite Rift Edge Harvesting Tool is 30” long! The blade itself, from tip to tip, is 20” long. Both the blade and handle are the customary hot pink. The officially licensed gadget basically looks identical to the game and even has the gold chain on the bottom of the handle. It surely would not disappoint the strictest cosplayer out there!

Sure, you could smack someone around in the game with a harvesting tool and this one looks tough enough for it. But really, it’s only worth 20 damage points per hit. You know what to do, harvest, build, and destroy!

What Drift costume would be complete without the Rift Edge Harvesting Tool? This realistic tool could be just what you need to gain the edge over other Fortnite costumes. You might want to order one today!