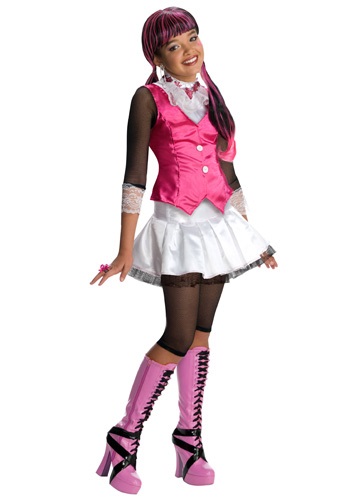 In the halls of Monster High there is a student who simply can't wait for her Sweet 1600th Birthday.

What? Oh, don't worry about it. 1600 is equivalent to 16-years-old in normie years. See, this 1599-year-old is Draculaura, vampire and adopted daughter of the infamous Dracula himself. She's kind of immortal, so her turning 1600 is like a normal humanoid turning 16. Which, as you can imagine, explains her excitement.

Draculaura is definitely a popular one at Monster High. She's the excitable one with pink streaks in her hair that may or may not be found hanging from the ceiling. She's a fun-loving vampire, and although she can get frustrated easily (and she's a bit of a gossip ghoul), she's mostly friendly and energetic. Did we mention she's vegan? A Vampire vegan that is (no blood or meat). Yeah, that's right. A vegan vampire. She's quite the trend-setter.

So if your kid is feeling a little ghoulish themselves, let them try out our Draculaura Costume. The costume has a white shirt with attached pink vest and lace accents. The white skirt has black leggings underneath along with tulle. Add a few pink accessories and your kid could be a sassy fashionable vampire in no time! Although we recommend they don't wait until their 1600th birthday to do so!

Product Reviews  Write A Review1 Review
Beware
By Anonymous / October 9, 2017
I got a small size for my 4 yr old. The top fits but the neck part is too small and wont strap together and the skirt is huge. Ive read reviews where other had the same problem.... other then that its a super cute costume.
Was this review helpful to you?YesNo
Get 20% Off