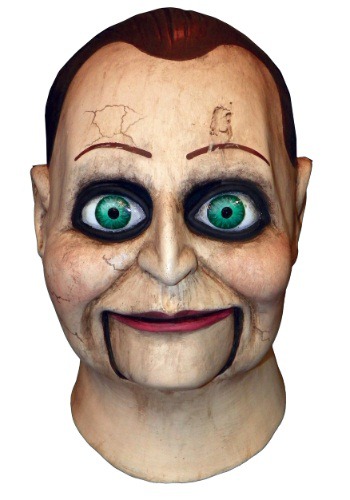 Think about all of the evil ventriloquist dummies you’ve seen in movies, TV shows, comic books, and cartoons. Probably quite a few of them, right? Now think about all of the pleasant, harmless ventriloquist dummies you’ve seen in those same formats. It’s a much shorter list, isn’t it? Unless you’re a major fan of live ventriloquism, the odds are that you have a lot more experience with creepy dummies than their harmless brothers. It makes sense, really. There’s something just plain freaky about a little wooden human whose whole act is coming to life on command and acting almost like a real human but just far enough off to make it weird.

Billy, the killer dummy from the Dead Silence movies, definitely falls into the creepy category. Just look at those penetrating eyes, that spooky almost-smile, the cracks and scars all over his wooden face. There’s no question this dummy is up to no good.

Ordinarily, putting words in the mouth of a ventriloquist’s dummy, evil or otherwise, takes years of practice, but we’re making it easy on you with this officially licensed Billy mask. The molded latex mask covers your entire head for a full-on creepy effect. Small slits above either eye socket allow you to see where you’re going, but you could probably just as easily follow the gasps of horror. People know to expect some spooky business when a ventriloquist dummy enters a room, especially if he’s not on anybody’s knee. When you look at it that way, you’re carrying on a proud tradition of creepy dummies.