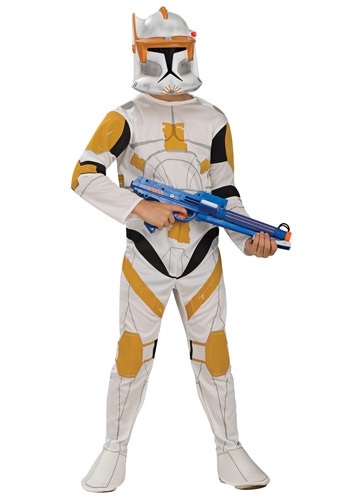 CC-2224, also known as “Cody”, was a clone commander who served the Grand Army of the Republic during the Clone Wars. He’s a war fighter and fought in many battles, and was sent after Obi-Wan when Chancellor Palpatine issued Order 66, effectively destroying the entire Jedi council in one single blow. (We knew Palpatine was a bad guy as soon as he decided to kill everyone. Why couldn’t he just have issued Order 65, which was the plan just to ignore the Jedi and never invite them to his birthday parties?) We’re fortunate Cody fell short of his objective, because without Obi-Wan no one would have told Luke to make that totally awesome trick shot when he blew up the first Death Star.

Like all clone troopers, Cody is a genetic copy of the legendary bounty hunter Jango Fett. Living with a thousand other identical guys must raise a lot of problems. If one of them gets a girlfriend, she might go smooch the wrong guy, leading to an embarrassing situation for everyone. And how do you do make sure every clone gets his underwear back after a communal laundry situation? Of course, there are far more farfetched things about Star Wars than laundry dynamics, so we guess we’ll just have to let it go.

This costume is perfect for any fan of the acclaimed Clone Wars series. The full jumpsuit has all the details of a totally rad space commando’s armor. It even covers the shoes so people won’t wonder why an elite soldier is doing walking around in sneakers! The mask comes off for sandwich breaks in between Jedi hunting sessions. Make sure to bring a blaster!