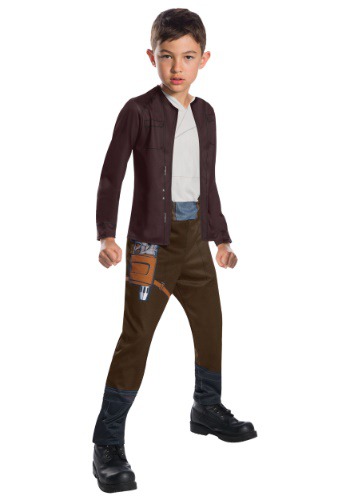 A better pilot in the galaxy can’t be found!

If you’ve got First Order problems

Call him and he’ll solve ‘em

…sorry about that. We just had to do a little cheer for our favorite new hero from Star Wars: The Last Jedi. Sure, Rey might have some crazy Force powers and a blue lightsaber, but Poe Dameron has the rugged good looks of Oscar Isaac. Finn might be a daring rogue with great comedic timing, but he can’t pilot a ship like Poe can. That’s why you should choose Poe when you’re trying to decide which Star Wars costume to get for your little one!

This kids Poe Dameron costume is officially licensed from Star Wars: The Last Jedi and it’s perfect for any kid who chooses Team Poe! It comes with a full jumpsuit that recreates the look of the outfit worn by Poe in the film. It has an attached jacket front and an attached belt around the waist. It even has a fake gun and holster printed onto the pants. Once your child has it on, he may just be ready to hop into an X-Wing for an epic battle against The First Order. Just make sure you give him the backup he needs, since he’s not going to be able to take on Kylo Ren all by himself!