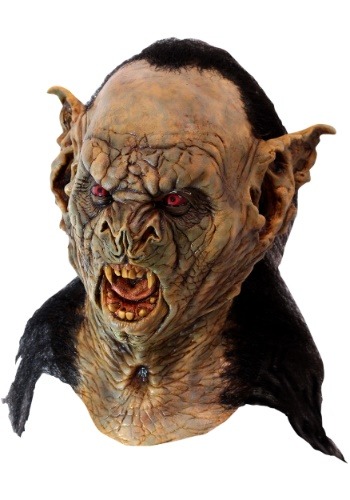 We think that the life of an ancient noble vampire seems pretty awesome, for the most part. Now, yes, we know that Dracula isn't allowed to step into the sunlight and he has to sleep in a velvet-lined coffin all day but that sounds pretty good to plenty of people that we know. The best part, other than literally being an immortal, is the ability to transform from an old count to a dapper young man to a weirdly fit bat guy, and then all the way into a pile of rats. With all those skills, you could go almost anywhere, as long as it was at night. Even New York's most fancy restaurants have a hint of rats somewhere. All you'd have to do to get a table without waiting a long time would be to transform from bat to man in the bathroom. Yes, some might say that's squandering hardcore vampire skills but have you ever tried to get a spot at one of those places? We think it's worth it!

This fully-licensed mask represents one of the most disturbing forms that Dracula took in the 1992 classic horror film by Francis Ford Coppola. It has a hairy look on the shoulders and head with crinkly oversized ears, a flat bat nose, and an open mouth that no one will ever forget. While you might not be able to transform into a pile of rats when cornered, you're still sure to spark fear into the heart of even the toughest vampire hunter

This mask is sure to excite any horror movie fans that saw Bram Stoker's Dracula back in the day! You don't even have to hunt down your lost love after hundreds of years of bitter loneliness, just put on this mask and head out into the night. This is sure to drive vampire lovers a little batty!