Day of the Dead Costume for Boys 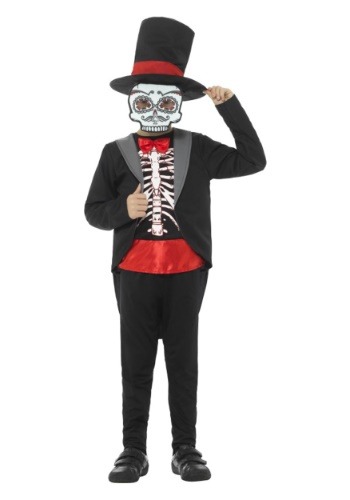 Day of the Dead: You'd think that a holiday with a name like that would be all about somber reflection but it's much more than that. Day of the Dead is a holiday mostly celebrated in Mexico but throughout the world. There are cultures that celebrate the departed in a variety of different ways at different times of the year.

People all around the world believe that on certain days, or a certain month, in the case of China's Hungry Ghost Festival, the line between the spirit world and the land of the living is thin, allowing the dead to visit our world, for better or worse. There are remarkable similarities in the ways that people treat the visiting dead. Typically those who have passed on are left offerings, everything from their favorite foods to candles and flowers. In some festivals, people burn paper money, cars, even mansions to give to their loved ones in the afterlife.

The Day of the Dead festival is celebrated with altars to the deceased, parades, and plenty of flowers especially in orange, red, and yellow. Some of the tradition predates the Spanish arrival to Mexico, coming from the month long Aztec celebration of the dead. It's become an artful blend of the two cultures with people painting their faces as skulls and dressing in the ways of their ancestors.

Your child can take part in this ancient, world-wide tradition with this modern costume. The jacket and shirt front create a cartoonish look with an illustrated ribcage and bright red sash and bow-tie. He'll look like he belongs in the Day of the Dead parade in the black and red top hat with the attached skull mask. Whether you're celebrating Dia De Los Muertos or Halloween he'll be part of a worldwide celebration of the circle of life.