Hmmm, how to broach this subject delicately...wait, the subject is sexy poop, so that's not humanly possible? Okay! In that case, better include all the poop puns we can!! Now that we understand each other, away we go: Burger King's limited edition "Halloween Whopper" has been making headlines lately, and not because of its spooky black bun. Let's say this #1 headline has more to do with...#2. That's right, those brave enough to try this festive food have reported that after consuming the burger, their poop turns GREEN! Burger King has assured consumers that the bread contains less than 1% food dye and is completely safe, but that didn't stop the hashtag #GreenPoop from blowing up on Twitter, and it sureeeee didn't stop us from parodying this whopper of a story with a Halloween costume idea! Without further a-poo, we bring you a DIY tutorial on how to create a sexy green poop Halloween costume.

Face it...a "regular" green poop costume would have just been too expected. 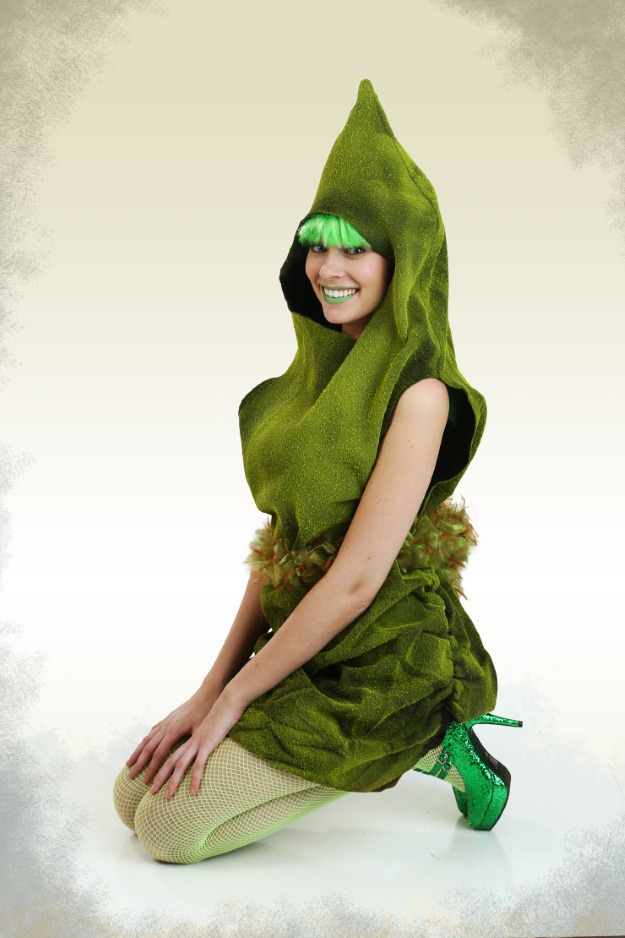 Sexy Breaking Bad costume? Been there, done that. Sexy Ronald McDonald? Eaaasyyyy. Sexy poop? Finally, a bit of a challenge. To attempt this rather "corny" Halloween costume for yourself, you'll need to get a little creative. (A poop tunic doesn't exactly scream sexy.) But by adding accessories, like a belt to cinch the waist, a pair of high heels, and some fishnet stockings, you'll be well on your way to making fellow Halloween party-goers' cheeks "flush!"

To make a sexy poop costume (lol, is this real life?), you'll first need to procure a standard poop costume to use as the base. Our tough s#!t costume is the crappiest candidate we carry! We cut off the sleeves with a pair of sharp scissors, then proceeded to spray paint the entire thing an appropriate emerald hue. After waiting for it to dry thoroughly, we styled our model with "loads" of green accessories. If you're not quite brave enough to show up to a party dressed like this solo, and you want to give your green poop ensemble some added context, why not grab your main "squeeze" and dress him up as a Hallowhopper? Using a Sharpie to color the bun black is a bit tedious, but the ends justify the beans, if you will.

If you and your significant other choose this idea for your Halloween 2015 couples costume, rest assured you will be the "butt" of everyone's costume jokes...but in a good way! It's what you were going for, right? Just be prepared to hear, "nice buns" quite a few times throughout the evening. If, on the other hand, people tell you that you look like crap? Well, we're not sure how to take that. There's no manual for stuff like this. 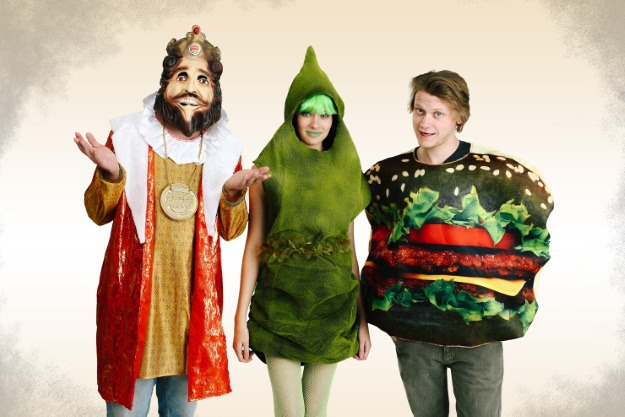 If you manage to assemble a group costume of a Burger King, green poop, and a black bun Whopper, and people STILL don't get it, well then they clearly don't have any social media accounts or ever go online and then we honestly don't trust them. Might we suggest politely excusing yourself from the conversation?

What do you think of our sexy green poop costume idea? Do we even want to know what you think about our sexy green poop costume idea? Are there any other sexy DIY costumes we should tackle? On any given year, topical costumes based on pop culture headlines are trendy Halloween choices, but 2015 might just be the first year where costumes based on "poop culture" reign supreme. In that case, HAPPY BOWEL-WEEN!