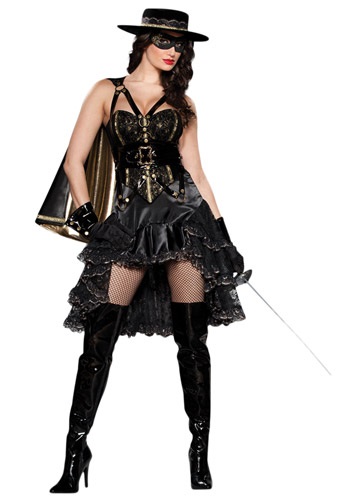 If you want to be the foxiest gal at the Halloween party this year then you need a costume that screams FOXY! However, before one can become foxy, one needs to understand what it means to be a fox. These majestic creatures don’t get by with their good looks out in the wild. No, instead they survive with nothing but their stealthy and cunning nature.

Some describe them as ‘clever’, others as ‘mischievous’. The Spanish word for fox is zorro. If that word sounds familiar, don’t be surprised. There is also a heroic outlaw that went by the name Zorro. He used his intellect and calm demeanor to defeat many of his enemies, and he always looked good while doing so. Take a page out of Don Diego’s book of tricks, grab this Beautiful Bandida Costume and become the foxiest outlaw since McCulley’s fictional Hispanic hero!

Now Zorro may have been a vigilante fighting for justice, freedom, love, or whatever but that’s not who you are, and, let's not forget, it’s Halloween, a night meant for fun. So, rather than taking down bad guys, instead focus your energy on taking down bad times! Spread Halloween cheer while you run around town with this cute outfit. Use a goofy cape-flip to place smiles on the faces of all there to witness you. Draw out the laughter of good friends with some silly sword tricks… Now, we realize it may be safer to practice beforehand, however, we think that it may be a bit funnier if you just wing it.

Have the best Halloween ever when you show up to the costume party as the foxiest lady in the neighborhood. Add some mystery to other’s nights with a sassy eye-mask, and then add a dash of hilarity with some ridiculous antics. Become the new definition of foxy with this Beautiful Bandida Costume!