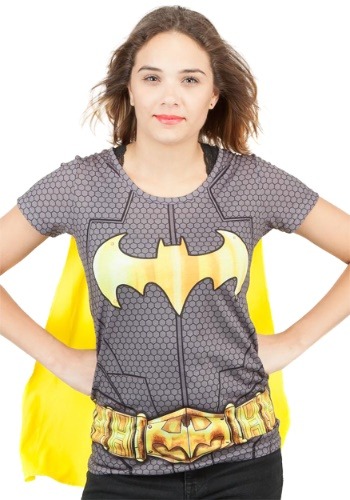 Superhero suits are expensive, complicated, and sometimes they can be a little bit difficult to get into too. But there is an unmistakable aura that you get from wearing some superhero style--whether it's an emblem on your chest, heavy duty armor, or just a cape fluttering in the wind, everyone knows a superhero when they see one.

And needless to say, if you've had your sights set on becoming extra heroic, maybe that was the thing that's always kept you from saving the day. A superhero costume isn't just impractical, it's pretty darn tootin' expensive too! Well, if lack of a proper suit has been the thing keeping you from becoming the hero you've always been destined to become, you're going to have one less obstacle in your way when you pick up this women's sublimated caped tee!

It has all the style of classic Batman armor, but it's just a sublimated print, so you won't have to be weighed down with any of the clunkiness of alloy armor plates. A signature Bat logo is printed on the chest, along with a pretty sweet utility belt as well. The yellow cape completes the effect, and it is removable since it comes on and off with hook and loop fastener strips. All at a price that doesn't need the bankroll of Bruce Wayne to afford it. Now that sounds like just the kind of t-shirt you need to really become a hero!