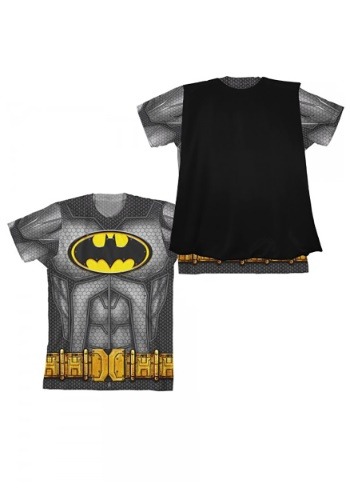 So, did you happen to glance up at the sky just now? There's a certain something that we sure hope you can see. Yes, it's the Bat Signal, high above the city. It's up there, the Bat logo shining bright against the dark clouds over Gotham City. And that can only mean one thing. Commissioner Gordon needs Batman to save the day!

Yes, it will be time for him to put on his Batsuit and save the day. And it will be super easy with this boy's Batman sublimated cape costume t-shirt. With all the details of the Batman suit featured in sublimated print, and a detachable cape, he'll be ready for all the action!

This Batman t-shirt costume for kids is DC Comics officially licensed. 100 percent polyester, it features a sublimated print on the front and back that shows the bat logo, armor, and utility belt. It also comes with a black cape that secures to the t-shirt with hook and loop fastener strips.

For Halloween and Beyond

We know, we know. He's not quite ready to save Gotham City. But as for trick or treating on Halloween night? He's got it covered! Get him this kids sublimated costume t-shirt, and he'll be ready for a ton of fun.

Size Chart
MLXL
Inches
Centimeters
Questions & Answers
There are no questions for this item yet. Be the first to ask a question!
Ask a Question