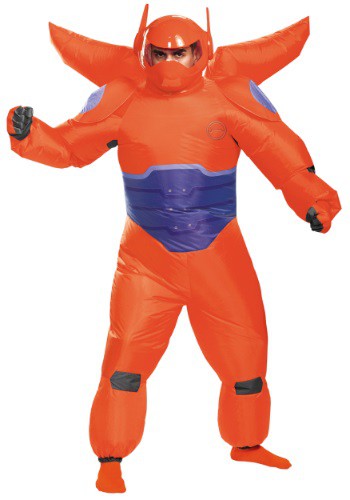 In the futuristic city of San Fransokyo, anything is possible! It may sound cheesy at first, but once you see how awesome an inflatable robot looks with a couple upgrades and some cool friends that believe in him, you'll just start cheering him on! Or, you can become the awesome crime busting bot in this Red Baymax Inflatable Costume, which is even cooler than cheering!

In the thrilling Disney movie Big Hero 6, Baymax starts out as a robot that's programmed to be a medical helper, but his talents are little limited until he's upgraded by his pal, Hiro, to help him stop an evil plot. Then, he really gets to show off what he's capable of! What is he capable of, exactly? Glad you asked! He has a rocket-powered fist that he can launch at bad guys, he is covered in hi-tech armor to protect his squishy balloon body, and he's also fully programmed in a wide variety of fighting styles. Oh, did we also mention that he can fly!?! So yeah, we guess you could say that Baymax turned into a pretty cool dude (even if he hasn't quite gotten the hang of “fist bumps” yet)

What better way to turn into a cool inflatable robot than in an inflatable robot costume? This officially licensed outfit makes you look just like the big friendly robot when he's in his superhero armor. There is even a battery powered fan attached to keep the bodysuit full while you wear it, to give you Baymax's plush build. Villains of San Fransokyo (or of your costume party) don't stand chance when you're in this wicked super suit!