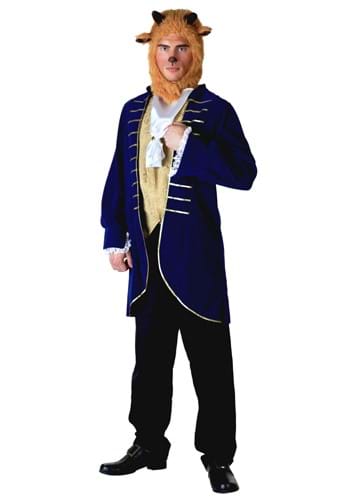 She warned him not to be deceived by appearances, for beauty is found within.

Sometimes we see what is on the surface. We judge books, and people by their cover, or appearance. We know we shouldn't do it. But we still seem to do it. We keep making the same mistakes over, and over, and over.

The Beast has had the same problems that we have. He judged people too harshly based on what they looked like. He wouldn't give an old woman shelter in a storm, all because she was ugly. But he got his punishment. The old woman was really a witch. A witch who did not approve of his judgments. She cursed him to live as a beast until he found his true love.

This year you could be the cursed Beast. Doomed to wait for his beloved Belle. Put on this Adult Beast Costume, and take a more proactive approach to finding love than Beast in the Disney movie. Get out of your castle, and look for a someone who moves your heart. But do not just judge this woman on her appearance. Get to know her, maybe not by kidnapping her, and locking her up in your castle, but rather by going on nice dates together. Hopefully she will be the one to break the spell on you. Turning you back into the handsome prince you are. Beautiful on the inside, as well as the outside.